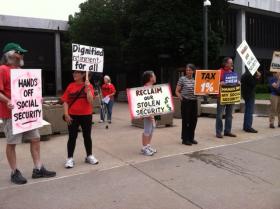 Protestors gathered in front of the federal building Tuesday to speak out against a plan in the President’s proposed budget that would change the way government measures inflation.

Instead of a the standard cost of living adjustment, the so-called chained Consumer Price Index would be used.
It measures what it costs to maintain a standard of living by figuring how consumers change their buying habits as prices go up.

But the impact would be a cut to Social Security benefits, according to Paula Hansen, president of the group Metro Justice.

Hansen and her group argue it would greatly impact those who depend on Social Security, and it doesn’t take into account the high health care costs facing seniors.

Her group is advocating for CPI-E, or a consumer price index for seniors, which would take into account medical increases.

Advocates for the chained CPI say it would reduce the federal deficit by about 230-billion dollars over the next ten years.

This site uses Akismet to reduce spam. Learn how your comment data is processed.